In a free state by V.S. Naipaul – A book review 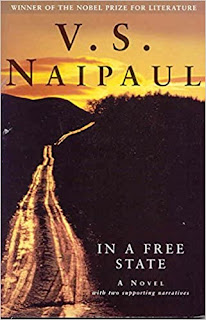 ‘When the student is ready the teacher will appear.’ - Lao Tzu

This is only part of the quote and it’s got great depth. However, in this case, the teacher did appear but I realize I wasn’t really ready when I attempted to read this book for the first time. This time around I seem to have a better understanding of its brilliance and feel educated.

The theme is displacement and it makes its presence in the primary characters in the stories. Mr. Naipaul is an eloquent genius who I think doesn’t believe in packaging; the reader sees the characters as they are because they are precisely as they have been written about. This is prose of immense depth.

These are sketches of people away from their homes in different countries, inadvertently, compellingly, adamantly or consciously trying to adjust and blend in the labyrinths of a new life.

The needless harassment of the tramp aboard the ship in the ‘Tramp at Piraeus’ shows how uncomfortable unconventionality can make us; how ruthlessly it can anger us, how easily we can yield power where it is possible not where it’s necessary. The discovery of himself and his existence in a foreign land, Washington in ‘One out of many’, tells the wonderful story of a house-help from India, Santosh. Dumbfounded by the newness of everything, sleeping in a closet, his world is as enclosed and confined as the closet or his master’s room. You give a child a colourful beautiful toy and then take it away – the child is confused, lost; the crying and tears only come later. In this new country and city, Santosh discovers a toy he never had – his identity, his face, himself; he realizes he’s not just a servant, but a person, an individual. But it’s lost – this toy, this identity, soon after its discovery and what remains is just another brick in the wall, a compulsion for compromise. Like an institutionalized slave, struggling for freedom, he doesn’t know what to do with it when it has been achieved; he’s lost.

‘Tell me who to kill’ is about hatred. A disorientated and resentful youngster from a village, envious of his uncle’s social façade of a status and embarrassed by his own family’s sends his brother abroad to study and follows in tow to check-up on him. But once he’s there, he cannot leave; he’s caught in the mad rush of earning money and giving his brother a better life. A sense of pride is crushed with the indignation he feels towards everyone; a crime is committed and a life is wasted. Who’s to blame?

‘In a free state’ is the longer story and I liked it immensely. A drive through the landscapes of Africa by two office bearing foreigners, whites in a time of political chaos doesn’t remain just a journey on the road; it’s a journey into the conflicting thoughts of these individuals about this country they are in now and its people. A fracas in their heads is out in dialogue when difficult questions are asked and answered by the two about their purpose and perceptions in this foreign land. The conversations pinch you in the right places as they question the basic thoughts of human nature, of seeing things and people in a new state. You realize there’s a huge difference between what one says, what one believes and what one has made himself/herself to believe in and these conflicting thoughts are convoluted over time and undulating between them every now and then, one finally acts in a totally mismatched way. Should one act like Romans when in Rome? But it depends on who that ‘one’ is, probably the dependency is also on the colour of one’s skin, his or her social status, the privileges that one enjoys over others. The conversations and thoughts show how easily one can be judgmental when one is privileged. This is a contrast to the other stories as here the outsider seems to have an upper hand, condescending on the bearing and conduct of the locals. What gives them this right to intrude? Who has invited them to do so – to feel and act superior?

I remember a long time ago a good friend of mine and I were having a discussion about nihilism among other things. Deep into the conversation, I felt and shared with her that these are thoughts of the privileged and she agreed; a poverty ridden society or even a strictly basic one and its people have no time to think about these anthropological jargons. There are people who are ashamed to speak the local language in their own country but are happy to learn a foreign language to impress; there are narcissists who take pride in telling everyone around them how to behave, eat, talk, and dress among other things. The natives didn’t invite these foreigners; they are intruders in a way even if they hold a post in their society. And these intruders are happy to see naked savages perform a cultural dance and entertain them but the delight is limited to that; beyond that the inhabitants turn into ugly, disgusting aboriginals who are to be looked down upon, who need to be taught culture, who need to be despised because that’s what they are worthy of; lions in a zoo or circus are safer to look at, or when they are tranquilized - one can even stroke it’s mane but they’re oh so dangerous in the wild. It’s like visiting someone’s house uninvited and trying to play God.

It took Satan and an apple from the forbidden tree to make Eve and then Adam be aware and embarrassed of their nakedness; it takes an outsider to make the natives feel so – to be embarrassed, to feel wanting, to feel the darkness of their colour, to appear stunted in their esteem, to fall in a hole that wasn’t there. Condescension is an art and who better than the privileged to act it out; it takes great mental skills to make people content with their lives show what’s missing in their lives and then offer help, and then intrude on their privacy and lives, and then to yield authority, and then to transform or wipe them out.

Naipaul’s characters and their thoughts are those of the individuals in a foreign land and these individuals make people and these people constitute a society or culture. These stories are essential.

‘People are generally good till you cease to be the person they want you to be.’ – from an Omeleto video I watched recently. 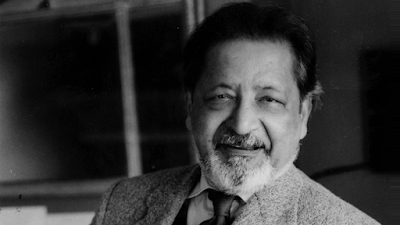 Posted by comfortably numb at 11:54 PM

Thank you or your comments.